Spatiotemporal control of the activity of biologically active compounds

One of our research interests is the spatiotemporal control of the activity of biologically active compounds.[15] Our aim is to control nucleic acid activity with light as trigger signal. Nucleic acids and their derivatives and analogues can be used for a variety of applications ranging from gene regulation over the modulation of protein function to molecular diagnostics, molecular probing and beyond. Light is an ideal trigger signal which can be used for addressing single cells in thin tissues or small organisms. With (confocal) microscopes it is possible to both visualize the sample of interest and irradiate certain areas with spatiotemporal and dosage control. There are several different strategies to control the functionality of nucleic acids with light.

Photolabile protecting groups (PPGs or photocages) are increasingly subject to molecular design to meet requirements such as absorbance in the visible spectral range, high molar absorption coefficients, and high quantum yields of leaving group release. Expansion of the aromatic system with a second aromatic ring resulted in this study in improved spectral properties. A systematic trend relating the electronic (p-donor or acceptor) properties of the new aryl substituent and its position in the DEAMb ring to changes in the spectral properties could be observed. Conclusions from the experimental results were supported by computations obtained by using time-dependent DFT in collaboration with the Burghardt group. [97] 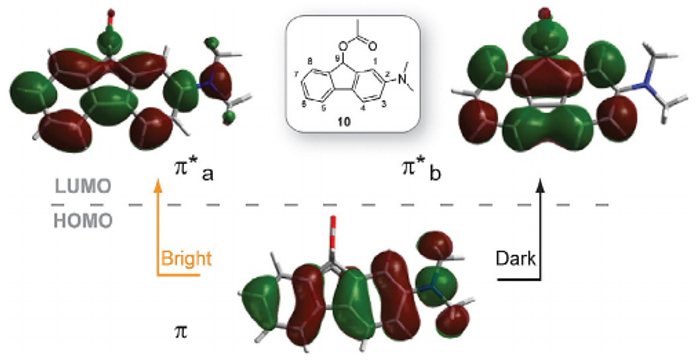 Two Photon Uncaging is a feature of high importance for medical applications as bioactive molecules can be released with very high spatiotemporal precision using NIR light which provides deep tissue penetration and less phototoxicity for the living tissue. Our work focusses on the design and synthesis of two photon active photocages by either structural modification of known PPGs or the assembly of energy transfer dyads. We developed new NDBF(1)-based photocages, based on computational calculations, with high two photon action cross sections and red-shifted absorption. Variation of donor substituents at the favored ring position enabled us to observe their impact on the photolysis quantum yields. Comparing our new azetidinyl‐NDBF (Az‐NDBF) photolabile protecting group with our earlier published DMA‐NDBF(2), we obtained insight into its excitation‐specific photochemistry which enhances the scope of orthogonal photoregulation. [95,115] 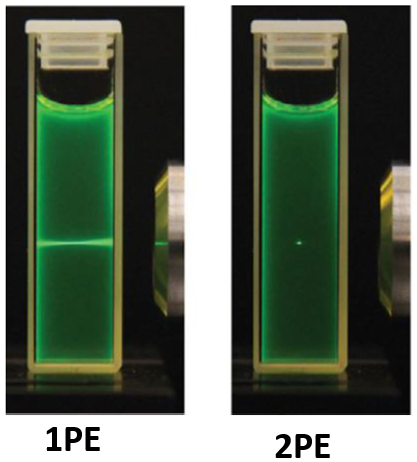 One of today’s common strategies relies on the temporal protection of one or several moieties with a photolabile protecting group which renders the whole molecule inactive. Thus, for example, we showed the regulation of angiogenesis in human cells and improved wound healing in murine skin of diabetic mice using a light-inducible antimiR.[84,61] Furthermore, we were able to control transcription[11], RNA interference[22] and protein activity with this strategy.[16,35,52,56]

A newer approach is the post-synthetic cyclization of oligonucleotides using photolabile protecting groups bearing alkyne or azide functionalities. After undergoing a copper-catalyzed alkyne azide cycloaddition (CuAAC), the cyclic oligonucleotide shows a significantly lower affinity for duplex formation.[107] With this strategy, we successfully suppressed binding of a 90 nt long aptamer to their target cells using only three photocages in combination with a tridentate azido photo-tether.[81] Cyclization reactions are also useful tools for stabilizing molecular beacons. As we demonstrated, photo-tethering in the loop region can reduce off-target effects and additionally allow spatiotemporal activation.[116] 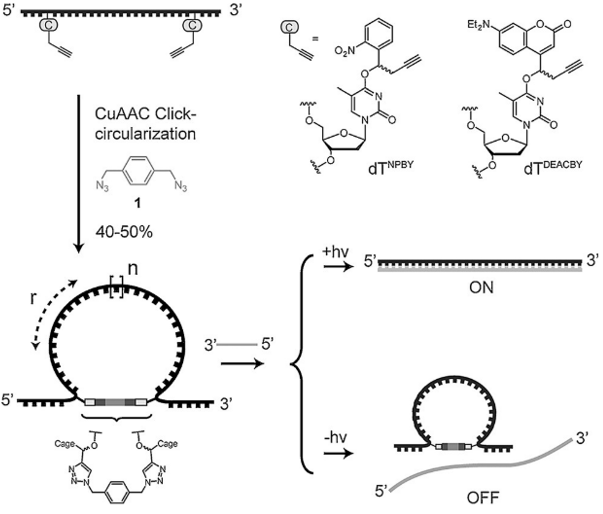 RNA transport and regulation are fundamental processes in synaptic plasticity. To get a better understanding of the underlying mechanisms it is important to have probes that can be activated with high spatial and temporal resolution. Our lab is interested in the design and synthesis of small fluorescent oligonucleotides that can be used to understand the molecular principles of synaptic plasticity upon external activation. We already visualized the maturation of miR-181a in hippocampal neurons with a precursor miRNA that exhibited an activity-dependent increase in fluorescence. This pre-miRNA can be used to enhance the precision and robustness of miRNA-mediated translational repression.[82] Secondly, we were able to localize and track maturated miRNAs with light-activatable molecular beacons (MBs).[116] Very simple modifications prevent the MBs from hybridizing with target RNA before activation with light. Not only miRNAs, but also mRNAs dynamics play a crucial role in remodeling and maintaining synapses. Therefore, we addressed three different synaptically localized mRNAs and used MBs to track their movements.[118] Upon different forms of synaptic plasticity, we found widespread alterations in mRNA behavior.

For the structural or functional investigation of DNA and RNA, position-specific modifications need to be introduced into the sequence of interest. Apart from the chemical solid-phase synthesis, we are working on a chemo-enzymatic approach. Here we use a cascade of enzymatic reactions to incorporate single photoactivatable modifications into RNA.[99] With this method, we can overcome solid-phase limitations.

A fulgide photoswitch is presented as a novel chemical actinometer for “counting photons”. It can be used for a broad range of wavelengths from the UV to the NIR region (340–700 nm). It is easily accessible and has a robust photochemistry and high fatigue resistance. Quantum yields of photoswitching were measured for a series of wavelengths and standardized against known standards (ferrioxalate actinometry, calibrated photodiode). We also developed a method for the precise determination of photoswitching quantum yields by global analysis of the whole spectra and an alternative quick and easy method for rapid determination of photon fluxes. [106]

We regularly synthesize photocontrollable oligonucleotides as well as small molecule samples for our interdisciplinary collaboration partners. Research topics investigated within these collaborations are uncaging mechanisms[113], riboswitch activity[48,111], protein interaction[65] or ultrafast spectroscopy[74,83]
An example of collaborative projects is the investigation of the cMYC oncogene promoter by NMR spectroscopy. Here we synthesize and provide photocaged DNA sequences. The photocages prevent the quadruplex from folding and offer the possibility to characterize single conformations and refolding upon irradiation.[109,117]